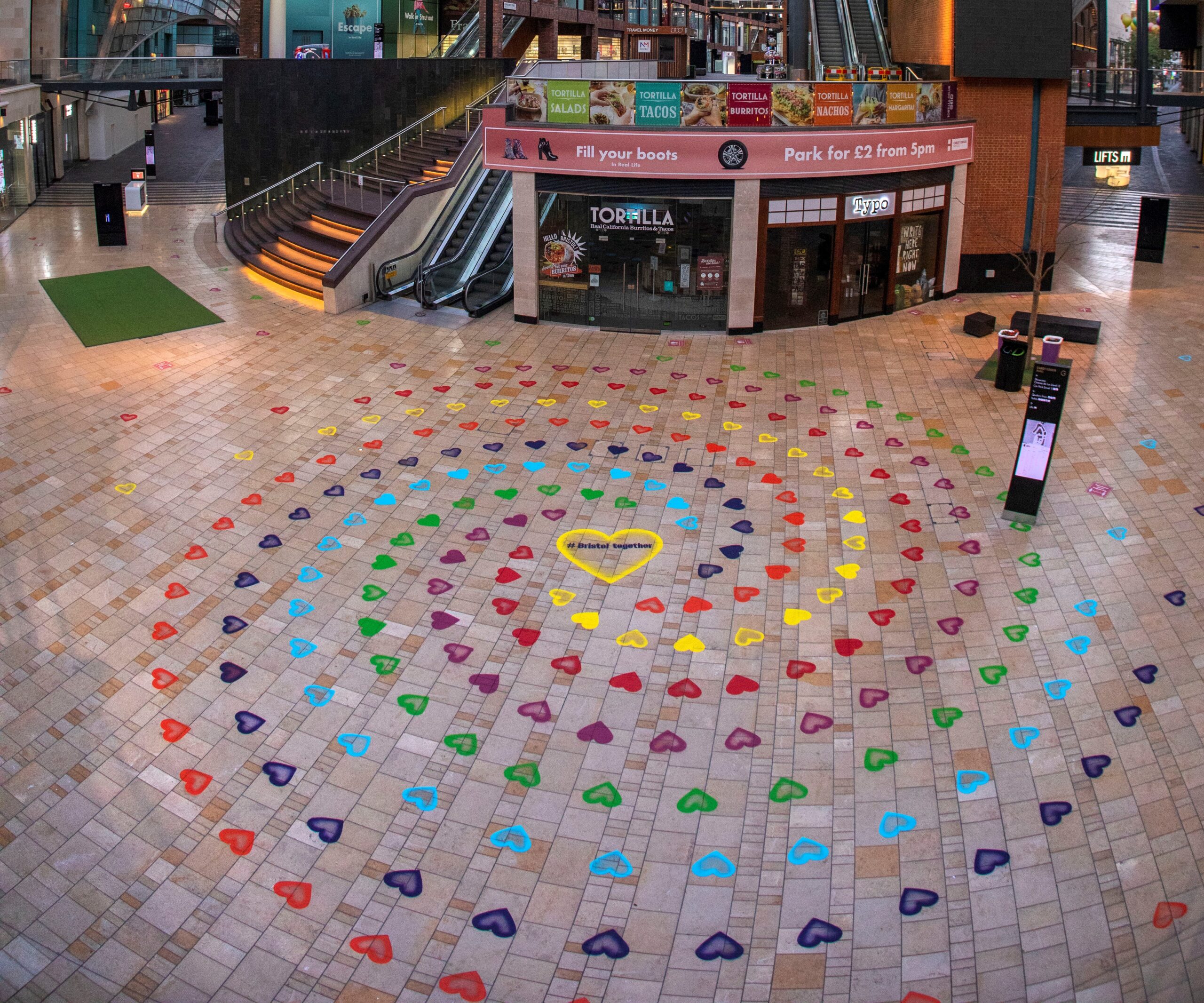 An explosion of hearts has taken over all corners of Bristol’s city centre, inviting people back to explore the heart of the city and bring #BristolTogether again.

The latest initiative ‘Follow your Heart’ sees six trails of 1000 rainbow coloured hearts guiding people around the city centre to and from an incredible spectacle in the atrium of Cabot Circus.

#BristolTogether
Created by the Bristol City Centre BID and Cabot Circus, this new installation is a continuation of the #BristolTogether campaign, which is working to support the safe reopening of the city and promote economic recovery.

The launch of the #BristolTogether campaign saw 374 socially-distanced hearts painted in Queen Square, Castle Park and College Green to encourage safe-use of the city centre’s most-loved green spaces and to promote the city as a safe and welcoming place to all.

Follow your heart
The trails are made up of 1000 hearts 50cm wide that converge in a large spiral in the middle of Cabot Circus that is 20m in diameter. One of the trails also leads through Quakers Friars, culminating in a smaller spectacle 6m wide.

Starting at either Cabot Circus or at an explosion of hearts, visitors can follow the trails to or from different corners of the city centre taking in landmarks like the Arnolfini, St Nicholas Market and Castle Park, as well as passing through Bristol’s most prominent shopping districts.

To complete the initiative, 12 Upfest crew members spent 10 hours overnight hand-painting each of the hearts along the trails.

“This project is an extension of the #BristolTogether campaign and one that we hope will bring people back to the heart of Bristol. We’re inviting Bristolians from across the city to explore the centre in a fun and interactive way, whilst bringing much-needed footfall to all central businesses and organisations.”

“We’re working hard to help our levy-paying businesses recover from the effects of lockdown whilst also creating a fun, safe and welcoming environment that visitors feel confident returning to.”

Robert Hobbs, General Manager at Cabot Circus said: “It’s great to see Bristol working together as a city. It has been a tough time for many people, so initiatives like this are more important than ever. The hearts will be in place for three weeks, so there’s lots of time to visit, and to rediscover all that the city centre has to offer once again.”

The #BristolTogether campaign is led by Bristol City Centre BID, alongside Visit Bristol, Business West and Broadmead BID, in partnership with the One City Economy Board and Bristol City Council. The campaign is also supported by the European Regional Development Fund through HM Government’s Reopening High Streets Safely Fund.

To stay up to date with the ‘Follow your Heart’ initiative and the #BristolTogether campaign, please follow @BristolBID and @CabotCircus on social media.