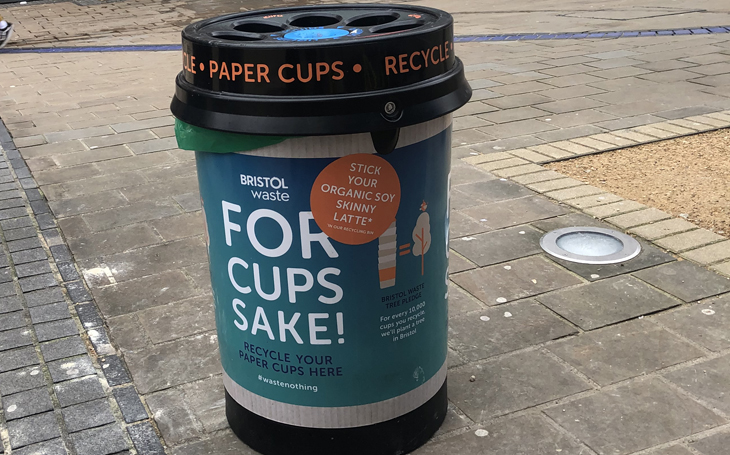 Bristol Waste Company’s new campaign For Cups Sake will see 100 paper cup recycling bins rolled out across the city with the aim of recycling up to four million paper cups in the first year alone! The bins will be placed along key commuter routes throughout central Bristol, allowing people to recycle their cups on the go. They will also be popping up in shopping areas, including Bristol Shopping Quarter.

Gwen Frost, Head of Sustainability & Innovation at Bristol Waste said: “Thousands of paper cups are thrown away every day in Bristol. Every paper cup popped in one of the convenient cup bins, will get a second life as high-quality paper, packaging and stationery products, and support us on our mission to help Bristol waste nothing.”

Bristol Waste Company was awarded the funding for the project through leading environmental charity, Hubbub, who launched The Cup Fund thanks to the 5p charge on disposable coffee cups voluntarily introduced by Starbucks to reduce plastic pollution.

Gavin Ellis, Director and Co-Founder of Hubbub, said: “While reusable cups are the most environmentally friendly choice, billions of paper cups are still being used each year and most aren’t recycled. We know that people generally want to do the right thing with recycling, but three in four people are still unaware that cups need to be collected separately from normal card and paper. 12 Cup Fund projects across the UK are helping to raise awareness and introduce eye-catching cup recycling points in high footfall locations, and we hope to make it as easy as possible for Bristolians to recycle their cups when they’re out and about.”

Where to the cups go?

Once collected, the cups will be baled at the Bristol Waste site in Avonmouth, before being sent to the James Cropper paper mill in the Lake District. Here the plastic lining is removed from the cup, allowing the paper to be recycled and turned in to high quality items such as notebooks and paper shopping bags.

Richard Burnett, recovered fibre expert at James Cropper tells us: “Disposable cups are made up of 95 percent high quality paper fibre with a five percent thin coating of polyethylene (plastic). Using our unique CupCyclingTM facility, which has the capacity to upcycle 500 million cups every year, 95 percent of waste is converted back into paper and energy is derived from the remaining plastic in the production of recycled paper. This gives second life to valuable fibre and creates a closed loop solution to the global problem of disposable cup waste.”

One Tree Per Child

In addition to giving the cup another life, using one of the new bins will also have local environmental benefits. Bristol Waste has teamed up with One Tree Per Child and pledged to plant a tree for every 10,000 cups recycled.