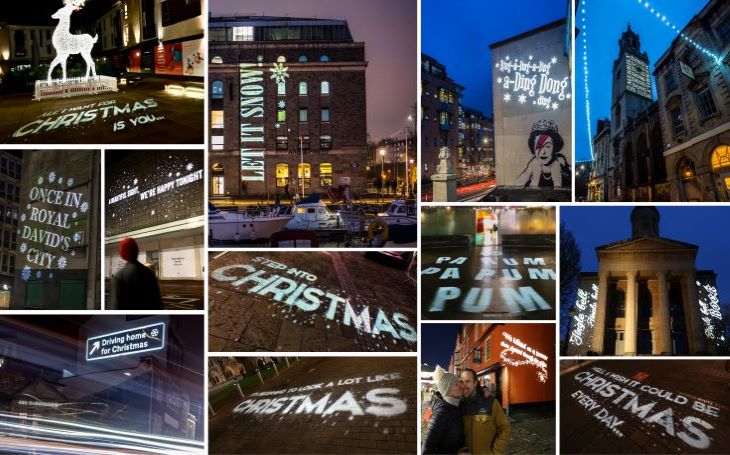 During December 2020, Broadmead BID teamed up with Bristol City Centre BID, Visit Bristol, Plaster PR and other partners for Bristol Advent’ures, an exciting arts project that lit up a new building each day with a selection of the most jolly and iconic Christmas lyrics, completing a trail of 24 locations by Christmas Eve.

The project was part of the #BristolTogether collaboration which brought thousands of people to the socially distanced “Hearts in Parks” this summer.

For this initiative, over 100 businesses came together to make a little bit of magic happen for the city, with locations including some of the city centre’s most iconic buildings including the Odeon cinema and Debenhams within Broadmead BID. The objective was to encourage people to support the city centre’s retailers, while remembering to be respectful and protective of each other and those working in the stores. The project was designed to be enjoyed whichever tier of Covid-19 restrictions we were in, bringing a much-needed lift to the city centre’s visitors, residents and workers.

Bristol Advent’ures was widely promoted across social media, with each evening’s new reveal shared by all involved. The public were reminded to remain careful, maintain social distancing, and be safe while also having a bit of fun and were encouraged to share their photos using the hashtags #BristolADVENTure and #BristolTogether.

We would like to thank Craft & More, Odeon Cinemas, Starbucks and Debenhams for their help in making this project happen.