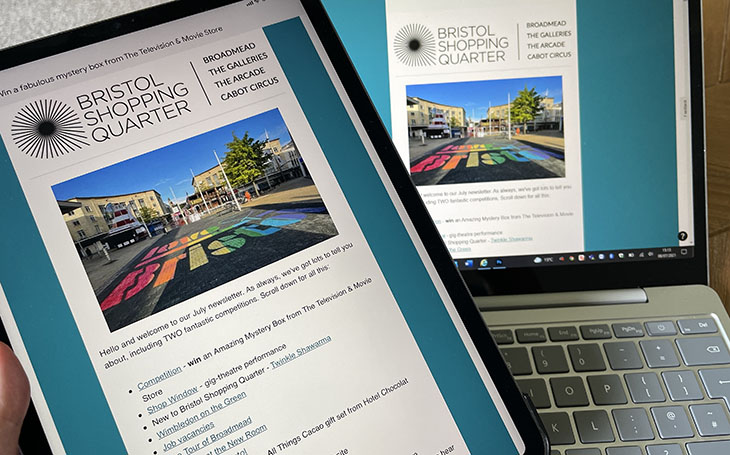 On 8 July we sent a Bristol Shopping Quarter newsletter to 14,174 subscribers.

The objective was to share news, offers and events, including Shop Window, a gig-theatre performance taking place in The Galleries at the end of the month; an introduction to Twinkle Shawarma, which opened a few days earlier; Wimbledon on the Green in Cabot Circus; job vacancies; the Tour of Broadmead charity fundraising event; summer activities at the New Room; and where to get lateral flow tests in Bristol.

We included a competition, in partnership with The Television and Movie Store, to increase the open rate and to promote the shop, which celebrated its first anniversary recently. The competition was also promoted on Facebook, Instagram and Twitter, with entrants invited to opt in to receive future newsletters and to receive emails from The Television and Movie Store, this resulted in 500 new subscribers and a list of over 700 contacts that we were able to pass on to TVM.

All Broadmead BID retailers were invited to submit content, including online deals, good news stories, shout-outs for their teams, and any virtual activities and events they have planned.

You can read the newsletter HERE.

Our next newsletter will be sent out late July, a few days before the start of the Tour of Broadmead.