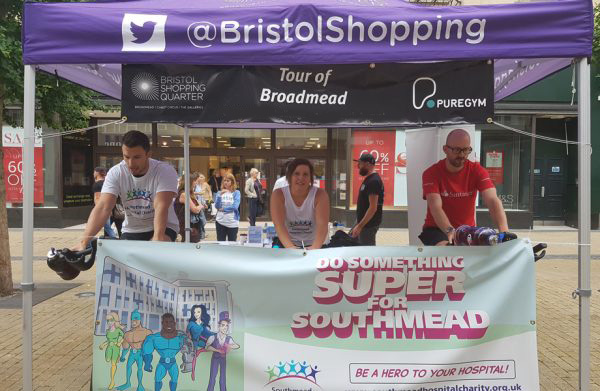 Some of you will remember The Tour of Broadmead, our charity fundraising event inspired by the Tour of Britain, which ran in 2016, 2017 and 2018.

A planned one-year break in 2019, turned into two years… but now it’s back and we’d love you to join in.

The Tour of Broadmead is an eight-day static cycle relay, running from Saturday 31 July until Saturday 7 August, and each day we will be raising money for a different charity.

We’ll have two bikes on the go, between 11am and 3pm each day (thanks to Melissa and her team at PureGym for lending us the equipment).
One will be manned by the charity and we’re recruiting volunteers to man the second.

Can you help with cycling?

Our eight charities, listed below, have had a really tough couple of years and every penny we raise will be hugely appreciated.

We’re booking half-hour time slots, with start times between 11:30am and 2:30pm. (As the organiser, and to set a good example, Viv, our digital marketing executive, is going to cycle the first half hour herself each day!)

If you’d like to get involved and be added to the rota, please email viv@broadmeadbid.co.uk as soon as possible, telling her what day and time you’d like to do.

In return, you’ll get the joy and happiness that results from doing something good AND mentions on the @bristolshopping social media channels.